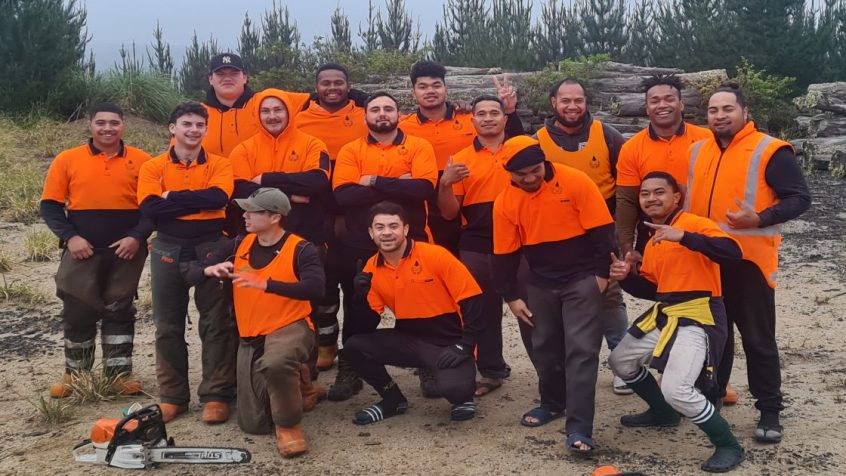 Ten silviculture crews around New Zealand have completed a trial of a new mentoring programme developed by the Forest and Wood Processing Workforce Taskforce, with funding from the Forest Growers Levy Trust and support from MPI.

Mentoring programme manager Greg Steele says the Taskforce is looking to improve the status and mana of the silviculture sector. “We want to formalise mentoring in the forestry training infrastructure, especially as some good crews already do take on this role. Using the process, we aim to get new people more skilled earlier in soft and practical skills. We selected crews who were interested and had a new entrant to put through.”

Currently new entrants are encouraged early on in their work to achieve unit standards to meet compliance standards. “We thought if we identified other key interpersonal, communications and induction skills and packaged them on a time-serve basis, for example within the first month, that could work.

A person following the full programme will achieve seven to eight full introductory unit standards as well as achieving time-served milestones. They will be recognised at each milestone, beginning with a one-month certificate. Some of the guys have nothing in the past from school.”

As well as the presentation of a certificate in front of their peers, their elements achieved are downloaded via App onto a smart-card which shows these credentials as a part of their record of learning. A QR code allows scanning and immediate access to credentials held.

The mentoring programme is designed as a package that can run up to 36 months. The first three months have been trialled by the 10 crews. The trial results were assessed in late December and a report prepared for the Taskforce Council.

Greg Steele says he was happy with the trial outcomes. “The intent is now to ramp the programme up, engage more crews in 2022, and establish the training with funding from the education sector. “Mentoring depends on someone being prepared to address it and become a role model, rather than leave a new entrant to their own devices. In many cases, they turn people around and provide a real service to the crew and the community.”

Troy Mason, managing director of KTM Silverculture Ltd based in the Wairarapa, says the mentoring programme allowed their mentee to complete and pass three assessments in a day on the job – in communications, health and safety, and nutrition. “He is well on his way to getting his national certificate; that will be a huge reward for us. He is probably one of the strongest young fellows I’ve ever seen – a qualified builder and a shearer. He has a good work ethic and is willing to learn. He works in a great team environment and is outdoors all day.”

Troy Mason has worked in the industry for 30 years. His company employs 18 staff. His company does all aspects of silviculture and over the years he has employed many young people. “Many are referred to us by the police to give them a go and try to turn their life around. Some are at-risk or troubled youths. Some are too far gone to turn around. A lot of them don’t have a good work ethic. They don’t have a lot of confidence – we try to build that.

“That’s why there are accidents in forestry – they have issues, they have financial burdens at home. It’s being able to read them, take five minutes, being able to talk to them – whether it’s me or a crew member – and build a whanau-way around them; getting to know one another and if they are mentally ok”.

“As a company, we try to take the financial burden off our employees. We pay our cutters and production leads more than others pay them and because of what we do for them, their output is higher. As a result we deliver very good quality work to customers, which I can then reward in turn.”

Ben White, director of Ace of Spades Contracting Ltd based in the Bay of Plenty, is also a supporter of the mentoring programme. His company has two staff going through it. “It’s a better way of learning, especially if you have experienced mentors in the crew. Our workers don’t like to be cooped up in a classroom where things go over their heads but out here in the forest, they can relate to it. It provides a point of difference.”

He says their mentees are receptive to the information which includes safety and a knowledge of the bush. His company employs 16 people to do a variety of silviculture work and was set up two years ago by five directors who are good mates. The company evolved from that friendship,” says Ben White.

Photo: The Ace of Spades Silviculture crew where two new employees were engaged with Mentors Ben White and Cain McKenzie on the mentor programme