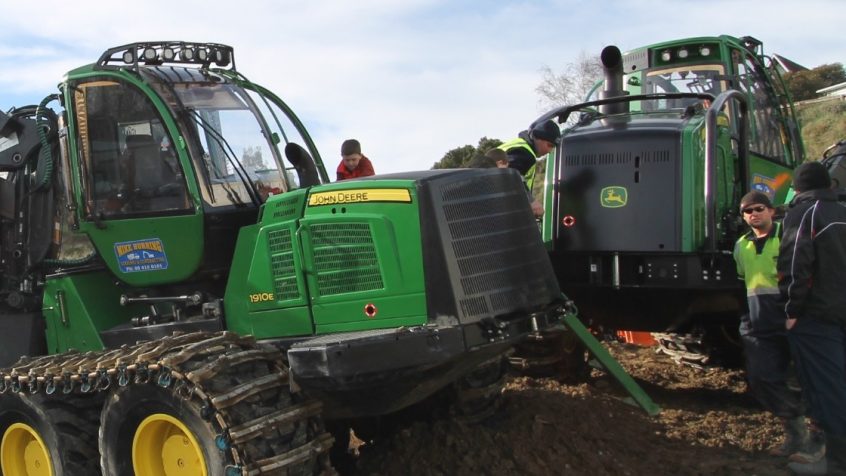 Mike Hurring Logging, the largest harvesting contractor in the Otago and Southland region, held an open day on Saturday 2nd June to promote forestry as a future career choice to local school students and their families. Mike brought back an impressive array of logging machinery from the bush to display to the 200 odd people who attended. There were harvesting machines, skidders, diggers and new state of the art production thinning monsters that were on show. People could get up close and personal with machines that no one can usually get within 100 metres of. Some took the opportunity to sit in the cabs and dream about a future career.

Mike also had his two harvesting machine simulators in operation and many, young and old, tried their hand at felling trees, loading forwarders, and driving these large machines through the forest.

These simulators are a vital part of the training school that Mike has set up at his Balclutha site in the lower South Island, New Zealand. This harvesting training school had its first intake in November of last year. The first six apprentices, with financial support being offered by local forestry companies, have just received their first NZ Certificate in Basic Machine Operation at the annual Southern Wood Council and Competenz Training Awards evening run in Dunedin on 25 May.

The apprentices attend five one-week blocks of training over a ten-month period. They then go on to complete their apprenticeship with practical training on their own work sites. Another group is due to start in late July. Space may still be available so contact Mike at mike@mikehurring.com or Phil Williams at p.williams@competenz.org.nz if you are interested.