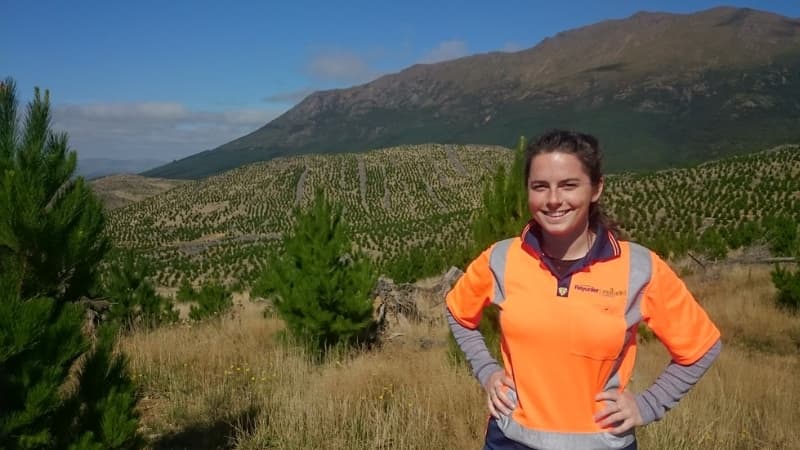 A group of young New Zealand foresters is working to raise the profile of their industry and provide support for those looking to develop careers in the sector. The Future Foresters group grew out of the NZ Institute of Forestry conference last September and has got off to a strong start, with some 200 members already on the books.

As well as raising awareness of the industry, the group aims to encourage people into the industry and make the wider community aware of the employment opportunities in forestry. The group is unashamedly modelled on the Young Farmers organisation and hopes to achieve similar longevity and success.

”Often there is not a lot of awareness about the range of opportunities available in forestry,” says Acacia Farmery, an establishment forester with Rayonier in Southland. Ms Farmery was part of the committee that set up the group with the aim to promote careers in forestry and to provide a voice for young foresters and others who are new to the sector.

Some of the early activities of the group have included promotions on social media and the setting up of a website ( www.futureforesters.com) and they also have plans to carry out a school’s programme and other educational activity.

”We’ve had excellent support from the industry to help us get under way,” Acacia says. ”Besides the NZ Institute of Forestry, other groups such as Forest Owners have provided support and sponsorship.” Ms Farmery was originally from Hawkes Bay and completed a bachelor of forestry science degree at Canterbury University.

She says almost all of the graduates from the four-year programme, the only one available in New Zealand, had jobs before the end of the course. She said her degree gave her a sound understanding of the cycle of forestry and made it possible to enter into a range of different roles.

She started working in a technical role for Rayonier in Auckland before moving south about a year ago. The company manages about 40,000ha in the south, including some native planting, with about 30,000ha in production. As their establishment forester, Ms Farmery is responsible for the trees over the first two or three years of their lives. This involves between 4000-5000ha.

Besides keeping an eye on the tress on the ground, there are also modern tools such as drones available to provide a previously unavailable overview of how things are progressing. ”Having an aerial view makes it much easier to keep an eye on the young trees and lets us see earlier on if there are issues that need to be addressed.”

The Future Foresters group is also intending to introduce development programmes as well as providing mentoring to those new to the sector. This will be the focus at the next forestry conference in Christchurch in July 2019. There are also plans to hold events in Otago and Southland as well as providing a point of entry in other aspects of the industry such as contracting and wood processing.