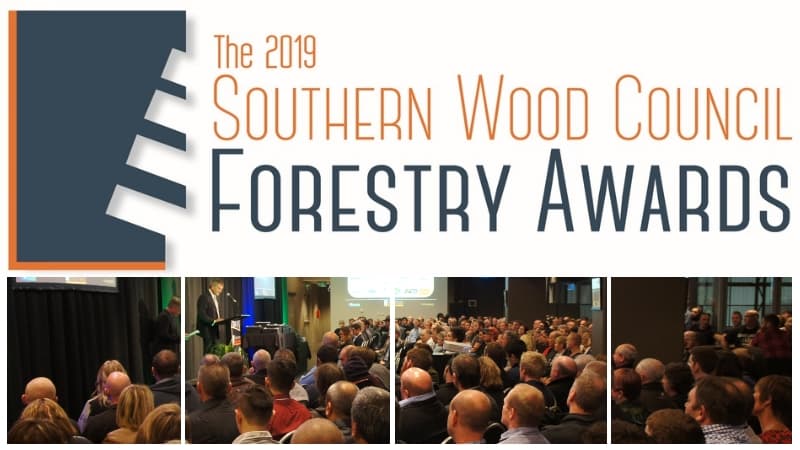 Last Friday saw an outstanding turnout by local forestry companies, contractors and transport operators from throughout the lower South Island of New Zealand.  The function was the 2019 Southern Wood Council Forestry Awards.

The Council, representing all major forest owners and wood processing companies in Otago and Southland ran the 2019 Awards programme in conjunction with the country’s industry training organisation, Competenz.

In addition to profiling the contribution that forestry and those working within the industry are making to the economic and social well-being of the region, the night was really designed to celebrate the success of those that had achieved formal training qualifications over the year.  Through a series of nine major awards, the event also recognised the forest industry’s top performers from across the lower South Island.

The industry certainly rallied on the night.  Like the previous four years, over 300 forest managers, forestry contractors, transport operators and product and service suppliers to the industry from throughout the lower South Island attended the awards evening at Dunedin’s Forsyth Barr Stadium.

“The turnout by forestry workers, their families and supporters on the night reflects the momentum that’s been building over the last year or so with training and safety in this region” says Grant Dodson, Chairman of the Southern Wood Council.  In addition to increased on-site training, two training courses in the region are now fully operational”.

“Mike Hurring’s Training School is running five one-week block courses in Balclutha for new entrants to the industry complete with hands-on training using harvesting machines located on site, leading to the first qualification of their apprenticeship.  A new course, Tokomairiro Training, an initiative that’s been set up by Tokomairiro High School and Johnson Forestry Services, with support being provided by local forestry companies, is also now running 32-week courses for selected school students who are looking at forestry as a future career opportunity”.

“As well as recognising the training achievements of forestry workers and crews that have really stood out over the past 12 months, the industry was able to come together at one place to celebrate the industry along with training and business success” says Mr. Dodson.

“The message on the value of the awards evening has certainly found it’s mark with many companies bringing through all of their staff and workers, from Invercargill through to Timaru.  One local contractor for example brought through close to 40 of their workers to celebrate their achievements in picking up training qualifications over the year as well as rewarding the harvesting crews for their efforts over the year”.

Presenters and speakers at this year’s awards evening included Jamie MacKay, Host of NZ’s New Zealand’s flagship rural radio show, The Country and the awards guest speaker Davey Hughes, founder of the well-known NZ outdoor clothing brand, SWAZI.  As well as being a businessman, Davey is a mad-keen hunter, conservationist, adventurer and was able to relate well to his audience and entertain all on the night with just a few of his life stories.

Around 160 National Training Certificates that had been achieved in Forestry & Wood Processing were awarded to top local contractors and forestry and wood processing employees.  Eight harvesting apprentices that have been involved in the Balclutha training school were also recognised at the awards ceremony.  All are anticipated to finish the course in October, with another course anticipated to start in August.

In addition, nine major industry awards for the year were presented on the night.  These were;

Eight harvesting apprentices that have been involved in the Balclutha training school were also recognised at the awards ceremony.  All are anticipated to finish the course in October, with another course anticipated to start in August.

Congratulations go to all the winners, the nominees, their employers and families.  This year’s awards programme with strong support from the wider industry, supporting organisation’s and major equipment and product suppliers has again been another important milestone for the forestry industry in the lower South Island.  Like other Regional Wood Council awards evenings, it’s firmly established as the major fixture each year on the local forestry calendar.