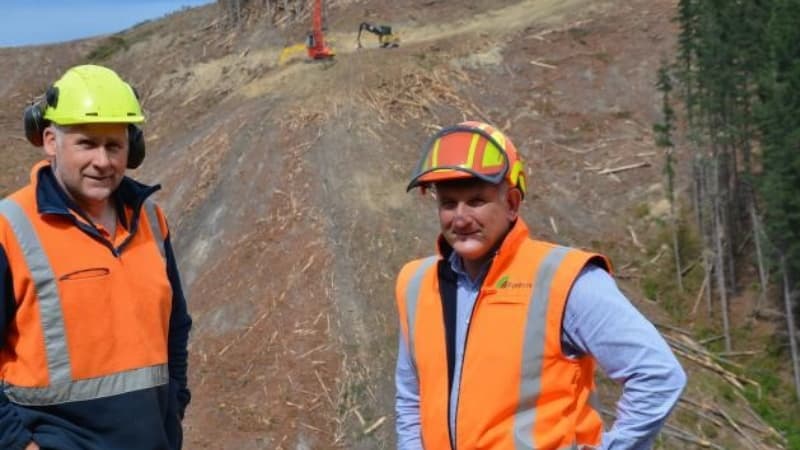 Forestry may be getting a bad rap lately particularly from the farming community, but there is no arguing with its returns. Brent Melville logged some time with City Forests this week, discovering a truly biodiverse, sustainable industry on Dunedin’s back door. City Forests is now well into logging its third generation of forests.

The company, which has held forestry investments since 1906, will celebrate its 30th anniversary of being a subsidiary of Dunedin City Holdings next year.  Since coming under DCHL ownership, the forestry estate has contributed more than $225million to the council — a nice round 1000% on the initial investment of $25.7 million in 1990.

On an annual basis, its rate of return has ratcheted up in recent history, on the back of high export log prices and trading of carbon credits.  The latter has contributed an estimated $30million over the past 10 years, and been used to reinvest in expanding its land interests and also to pay its shareholders more.

This past year it expanded its forestry estate by 1000ha, buying up several local farms, and paid total dividends of $8million to the city. Its rate of return over the past three years has been above 14%. Not bad for a company that employs about 12 staff directly and another 80 contractors; most ratepayers would not be aware of the scope of City Forests’ operations, says chief executive Grant Dodson.

The ‘‘big three’’ forestry companies in Otago — City Forests, Rayonier and Wenita Forest Products — control about a quarter of the estimated 206,000ha of plantation forests in the region.  Most of City Forests’ land, about 23,000ha, is located within a bike ride of the city of Dunedin. Its seven commercial forests — some of which are publicly accessible — span more than 16,000ha, with another 2000ha or so either undergoing replanting or under development.

Total tree numbers are at about 8million, of which 80% are radiata, the remainder being Douglas fir and other species, such as Macrocarpa.  It’s biggest forest is the 9500ha Tokoiti forest, located just south east of Milton. Its smallest is the 650ha Millers estate, near Glenore.

Across the estate, last year the company harvested 336,000cu m of trees at a rate of around 5ha a day, generating $59million in revenues and a total surplus of $25.2million.  Its joint ownership opportunities also generated income for other land holders; for example, the company had a joint venture over a 250ha parcel with the Scout Association. “They harvested at a good time, resulting in a payment last year of almost $1million,” Mr Dodson said.

The majority of City Forest logs were exported to the South Korea and Chinese markets, with just under a third of log production supplied to domestic mills through Otago and Southland last year.

To get the job done, City Forests has formed long-term partnerships with several logging contractors, including Dave Paul Logging and Gamble Forest Harvesting.  “We consider them part of the team, and the long-term relationship creates certainty for both parties as we rotate our harvests,” Mr Dodson said.

Gamble Forest Harvesting owner Tony Gamble said the relationship had dated back almost 50 years, when his late father Bill contracted to City Forests. “For us it’s a long-term relationship, which provides the certainty to buy an additional piece of equipment, for example.”

Mr Gamble, who employs about nine staff, said forestry had experienced rapid technological advance. “We have 11 pieces of kit on this site. The machines do most of the heavy lifting, systems are automated, and it’s not a matter of going at it with a chainsaw any more.”